Twenty-seventeen has been a crazy year, filled to the brim with quality metal from all corners of the globe in all sub genres! While the blog has been slow to update due to the sudden availability of paid writing work (the horror!) that doesn't mean that we (me) at Metal Undercover haven't been keeping up with new releases! Take a gander below the cut for the albums of the year, and keep a close eye on the blog in the coming weeks for discussion of some extremely honorable mentions! 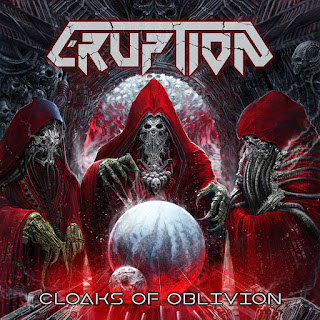 This underground gem of a thrash album from Slovenia came at me from nowhere with their single ‘Drones’ and would surely have taken the award for best thrash album of the year if it wasn’t for a certain other band. (See number 7) Eschewing the quasi-death vox of modern thrash in favor of soaring cleans and gang chants, Eruption stands out from the pack from the get-go, but it’s their attention to a hook-y song structure and catchy riffing that sets them apart from the chaff. And did I mention that album artwork? ORBS! 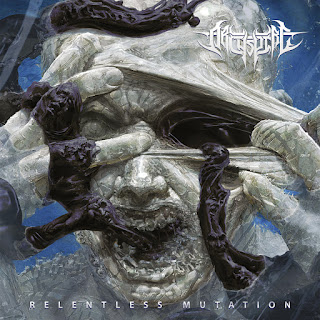 The technical skills of the boys in Archspire simply cannot be overstated. Guitarist Dean Lamb and co. tear it up here, laying on riff after tasty riff, sweeps and tapping galore! Vocalist Oli Peters delivers a stunning performance, spitting death vox like a cannon at inhuman speed. Seriously, this guy is a unique gem in the death metal scene. 2017 has been fantastic year for tech-death, and Archspire have a well-deserved place at the top of the hill. It will be interesting to see if they can top this one in the coming years! 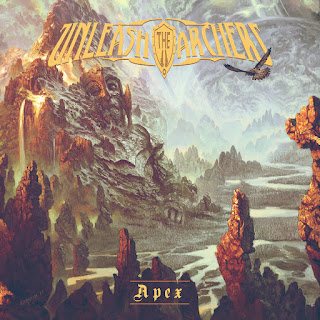 Unleash the Archers really isn’t my cup of tea. I was dragged into this album kicking and screaming, and at first I insisted that I couldn’t hear what all the fuss was about. And then I opened my goddamn ears and listened. Apex is a female-fronted power metal album that doesn’t try to follow in the well-tread footsteps of bands like Nightwish, but instead hares off in a less-symphonic power metal direction, complete with occasional folk flourishes. The rare usage of harsh male vox spices things up every now and again a la Epica, but they never overstay their welcome. ‘Apex’ hits all the right spots for a power metal album: It’s varied and well-written, avoiding the ‘same-y’ pitfall that stymies many of their contemporaries, the vocals are suitably epic and soaring without being overly saccharine, and the storytelling is solid. 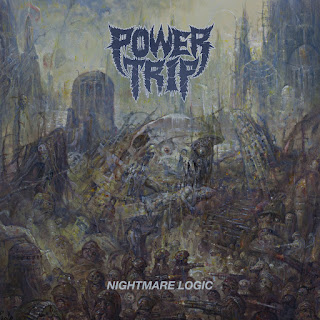 What hasn’t already been said about Power Trip by an almost universally fawning metal press? I almost left this album off of my list (maybe replacing it with Havok’s new platter) but it’s just So. Damn. Good. Modern thrash has no business being this intoxicating, but Power Trip has defied even the purest of the re-thrash detractors with its tasty old-school production, sensibilities, and style, which the band pulls off effortlessly while somehow still managing to come across as fresh and invigorating. Give this album a few more years to jell, and some of these riffs will stand up with the greats of all time from the ‘big four’. I’m calling it right now. ‘Swing of the Axe!' 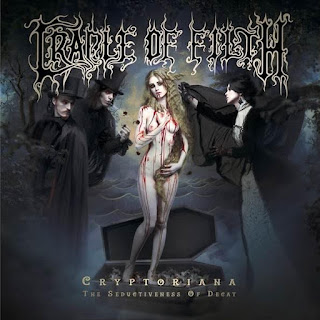 Best album since ‘Cruelty’. Ok, ok, put down your pitchforks, Cradle fans. I loved 2015’s return to form ‘Hammer of the Witches’ too, but ‘Cryptoriana’ takes what the band did with ‘Hammer’ and turns it up to 11. The guitar and riff-driven version of Cradle is back, and this time they’re spitting out gothic metal albums like it’s 1998. The inimitable Dani Filth sounds better than he has in over a decade, hitting high notes that most purveyors in fine metal have long believed him no longer capable of. Check out the ending section of ‘You Will Know the Lion by his Claw’ and you’ll need to pick your jaw back up from the floor. The production, composition, and performances on Cryptoriana deserve to be heard, even by metal-heads who have long since given this band a hard pass. 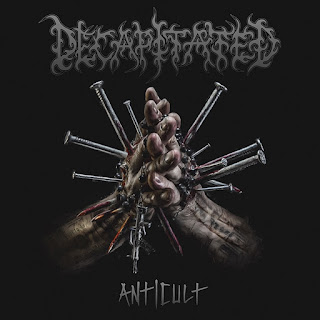 Some love and some hate Decapitated’s less technical modern albums and their reliance on groove and meaty riffs. Guess which side I’m on? Anticult is the band’s third album since their reformation in 2009 following the 2007 tour bus crash which resulted in the death and coma of Vitek and Covan (Drums, Vocals respectively.) Anticult is short, brutal, and to the point, pummeling you right from the start with tasty grooves and technical flourishes. Is this ground-breaking stuff? Absolutely not. But there’s something infectious about the performance that gets under my skin and demands repeat plays. The album’s compact length makes it easy to listen through any time you get the itch, and it’s always satisfying. 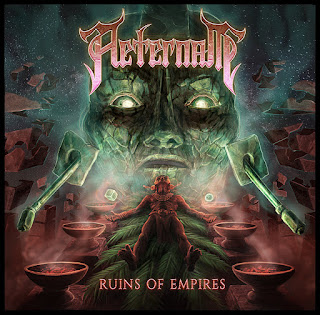 Canada’s Aeternam have a distinctive middle-eastern flair to their writing that calls to mind a more straight-forward Orphaned Land. Vocalist Achraf Loudiy truly shines on this record, from his deep throaty growls to lofty layered clean vocals; nothing ever feels out of place or wears out its welcome. The middle-eastern influence is front and center on several tracks, most notably on 'Nightfall in Numidia', a beautiful sweeping atmospheric piece filled with haunting melodies, traditional instruments, and percussion. Ruins of Empires is a must-listen for fans of symphonic death metal and middle-eastern melodies. 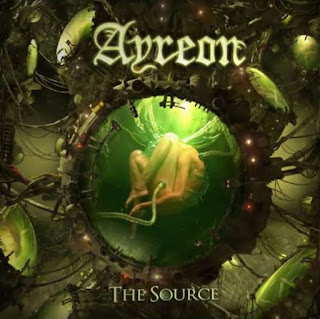 The Source is the latest metal opera from Arjen Anthony Lucassen, featuring the vocal talents of James LaBrie (Dream Theater), Simone Simons (Epica), Floor Jansen (Nightwish), Hansi Kürsch (Blind Guardian), Tobias Sammet (Edguy, Avantasia), Tommy Karevik (Kamelot, Seventh Wonder), and Russell Allen (Symphony X). And yes, it’s as epic as that list of high-tier guests makes it out to be. The Source is a concept album, following the events of Ayreon’s earlier album ‘01011001’ and follows a group of interstellar explorers fleeing their dying planet in search of a new home. If you can tolerate a little cheese in your diet, do be sure to check this one out! 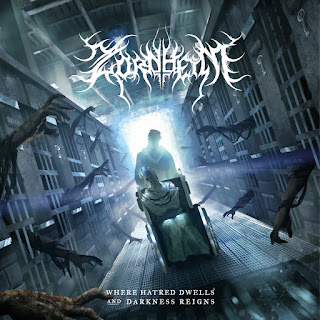 Well this one came out of nowhere! Zornheym do mid-career Dimmu Borgir better than Dimmu Borgir, and they do it with just enough of their own stylistic flourish to make them stand out from the pack. Now, normally I wouldn’t put a band that so clearly channels another band so high up on my list, but ‘Hatred’ is so well composed, performed, and produced that I couldn’t help coming back to it again and again over the months since its September release. Unlike their influences, Zornheym make heavy use of clean vocals, intertwining them with the harsh vox to much great effect. Expect tremolo and chugged guitars, blast beats, orchestrations, choirs, and clean/harsh vocal interplay.

Album of the Year:

In The Passing Light of Day is a hauntingly beautiful album that reflects on mortality, love, joys and angers of life. Written primarily by bandleader Daniel Gildenlöw while he was in a hospital in Sweden being treated for a life-threatening illness, the album possesses an authentic and raw look into the heart and soul of a man fighting and bargaining for his life. The music follows no obvious trends, flowing effortlessly from heavy guitar-driven rhythms to sedate piano to finger-picked clean guitars in a near-flawlessly executed concept album which will lift you up to soaring heights and plunge to a nadir of melancholic madness. Gildenlöw’s emotive clean vocals push the limit of what can be expressed vocally, and you can clearly hear longing and desperate love, boiling anger, grasping hope, and despair. Not for the faint of heart, In The Passing Light of Day is a dense and immensely personal album that demands your attention from start to finish with a tenacity unusual for an album over an hour in length. (All hail the man-bun!) 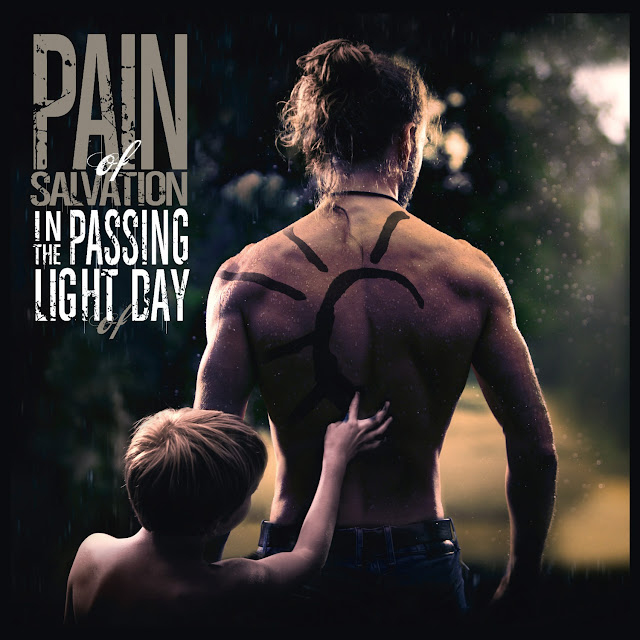