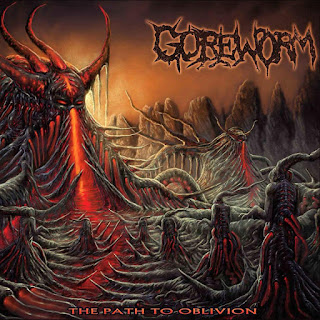 
At the ripe old age of 36, I may not be hip to the 'slams' that metal kids these days listen to on their shitty earbuds while I shoo them off my lawn with a grandpa guitar, hurling Slayer LPs in a frothing rage of tr00 kvlt righteous fury, but every so often I stumble down the rabbit-hole and something dank tenaciously sticks to my shoe, refusing to be ignored. Sure I'll walk around pretending like it isn't there, but eventually people start asking about the smell, and by then it's too late. I have a serious Goreworm infection, and as any metal-head worth their salt knows, the only cure for a bad case of the br00tal-deaths is to lance and purge the boils in the form of verbal or written diarrhea. This is the latter. I'm sorry.

Hailing from the middle of ass-fuck nowhere (Brantford, Ontario), Goreworm allegedly started as a project by Brent Moerschfelder and Jordan Elgersman, intending only to write a couple of songs "just for the fun of it." According to their press release, when they noticed that every track was better than the last one, they decided to go whole-hog and make an actual band out of it, proving once and for all that anything can be made better by chucking a few more Canadians at it. The malformed motley crew was then picked up by local legends CDN music and catapulted into the stratosphere of obscurity where I found them floating in the aforementioned rabbit-hole alongside an old Thy Flesh Consumed promo and Michael Jackson's 'Thriller'. Initially mistaking it for a copy of Abysmal Dawn's 'Obsolescence', I picked it up and joyfully skipped home, not realizing that Goreworm had used me as a vector to spread dankness to the uninfected multitudes who read this blog (all four of them.)


But what about the music you ask? Fuck you, I was getting to that. 'Rest in Piss' kicks things off with a restrained atmospheric instrumental before exploding like a putrefied boil with barn-burner 'Wombraider', which totally isn't the name of a Tomb Raider porn parody I rented back in the 90's. Around the 1:30 mark, the song devolves into a disgustingly slow breakdown that had me banging almost as much as the song's namesake. I'll skip the way-too-short 'Beneath the Plastic' to get to my favorite track on the EP, the wisely-chosen lead single 'Final Nightmare'. Holy fucking crap, this song is sick! Like all the best tech-slam, the best bits are saved for after the breakdown, and the solo here is one of the tastiest pieces of lead-work I've heard in at least the last twelve hours (or however long it's been since I last listened to Virvum.)

'Family Matters' opens with the soothing sound of the ocean tide and someone sharpening a straight razor. At 35-seconds someone farts and the music starts. (Keep it classy guys.) Here we've got a sweet mix of brutal death with catchy melodic death chunks thrown in for good measure. Closer 'The Path to Oblivion' ratchets the melo-death elements up and really shows how mature the band's song writing can get, bobbing and weaving from solo to solo with tremolo-picked guitar harmonies and ending with clean-picked atmospherics.

If you're still the type of person who buys music like a good little consumer, you should head on over to Bandcamp or the band's label CDN Records and shell out a few measly Canadian shekels to help support these guys. It's $5 Canadian for digital and $10 dollars Canadian for a physical CD. That's basically 50 cents in US dollars last time I checked the conversion rate on our monopoly money, so head on down to Canada's bargain basement empornium of tasty slam treats. I can't promise you won't be disappointed, but what else are you going to do with your money? Feed the homeless? Fuck you and your latte. Give your money to Goreworm.
Posted by Jeffrey R Dean at March 26, 2018