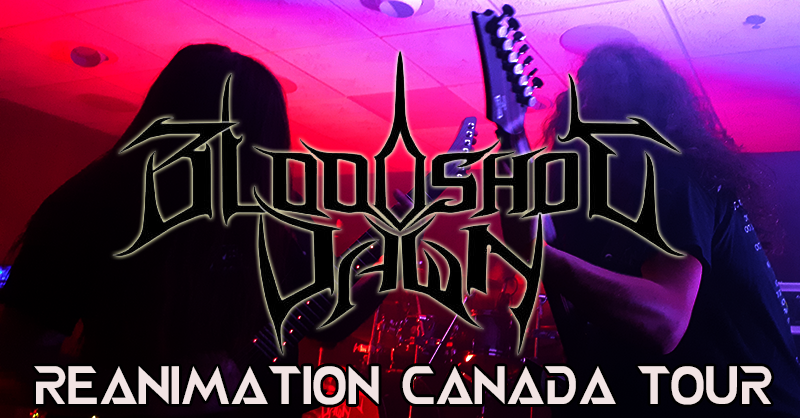 "Whose dad IS that?" Kyle Edissi (Æpoch, guitars) asked incredulously from the stage as a diminutive man, easily over sixty years of age, crowd surfed for the third time during last night's show. No one seemed to know, and it didn't matter in the slightest. Everyone on the floor was happy to give him the night of his life, transporting him around the floor atop dozens of helping hands. For all the bad reputation the industry press seems intent on leveling against the metal community these days for being a supposed 'unsafe space', it's anything but—at least if last night's concert at Kitchener's 'Schwaben Club' was any indication. People were attending from all walks of life: old-school geezers like myself, teenagers, men, and women (over a quarter of the show's patrons were female, a welcome sight!), and they were all there for the same reason—to witness the best technical death and melodic death metal that the region has to offer, topped off by a blistering set from UK's own Bloodshot Dawn on their very first Canadian tour.

First to take the stage were Ending Tyranny of Hamilton, Ontario. By far the most 'meat 'n potatoes' death metal of the night with hints of deathcore, they savagely set the stage for the bands to come, vocalist Callum Clark swaying in place between songs, opining the state of his hangover yet swigging a new beer between sentences. Their set was short, but they managed to impress me with their energy, and they played a few new songs which sounded like a nice step forward for them songwriting-wise.

Guelph's own Becomes Astral was up next, and they put on one hell of a show in spite of some odd mixing issues with the vocals (lead vocalist, Cam Sharer was very difficult to hear and Jamie DeBruin's clean vocals were far too over-powering) but when they began the sedate opening of the lead single from their album 'Paleblood Sky', 'The Glass Lake', the crowd, myself included, were held rapt by the musicianship on display. The clean leads from that song have stuck in my head since the first time I saw their performance video, and they pulled it off live flawlessly. 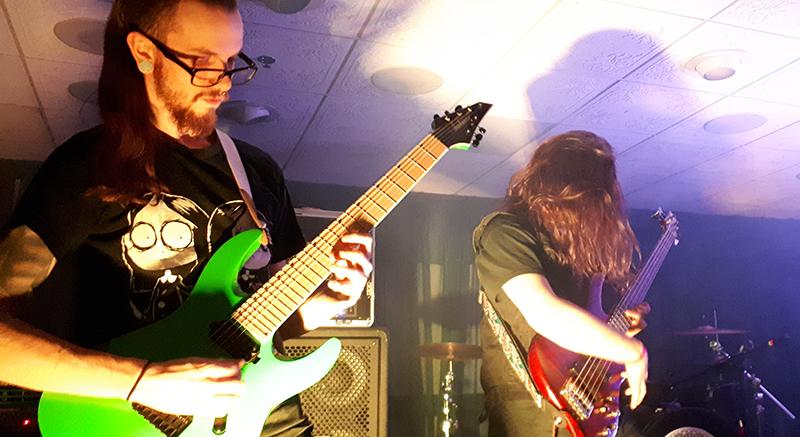 Becomes Astral have been a band to watch since last year when they blind-sided the tech-death crowd with 'Paleblood Sky', and their reputation is well-deserved. Lead guitarist Layne Richardson was an absolute beast for the entire set, tearing through immensely technical riffs and leads without breaking a sweat while Cam Sharer threw himself around the stage like a frenetic whirlwind of bottled energy.

Bloodshot Dawn took the stage next, to the seemingly ubiquitous sci-fi tones of the opening theme to 'Rick and Morty', ceding the headlining slot to Æpoch in celebration of the release of their new album, 'Awakening Inception'. They were joined for their set by Æpoch's drummer Greg Carvalho (double-dose of Greg!) Bloodshot Dawn's frontman Josh McMorran knows how to play to the crowd, and soon led us in a 'Bloodshot Dawn tradition': an old-school 'wall of death'. I haven't encountered this level of crowd interaction since the the last time I saw Warrel Dane (RIP) perform with Nevermore, directing a wall of death in a similar fashion. Playing to the crowd is one of Josh's strengths, and he seemed intent on proving it, leaping down from the stage and joining the mosh pit, ripping it up on his guitar the whole time without missing a beat.

The UK trio (and their borrowed Canadian) played through a lengthy set, culling liberally from all three of their albums, but making sure to hit fan favorites 'Smoke and Mirrors' and 'Survival Evolved'. Perhaps thinking that one Canadian playing with them on their Canadian tour wasn't quite 'canuk' enough, Josh invited Æpoch's Brett MacIntosh on stage to perform 'The Quantum Apocalypse' from their self-titled album. 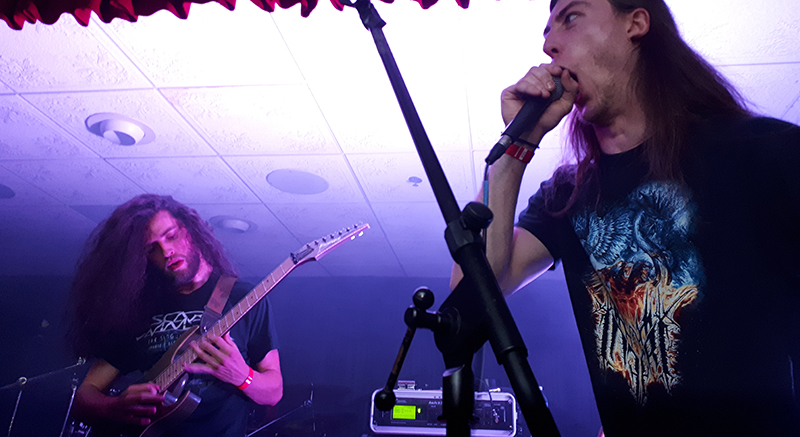 Bloodshot Dawn closed out their set with the one-two punch of 'DNA Reaquisition' and 'Reanimated', the former showcasing Morgan Reid's breathtaking lead chops before launching itself into Reanimated's brutal gallop. Picking out fans of the band's newest album was  as easy as watching for raised fists while mouthing the refrain: 'Re-Ani-Mate!' 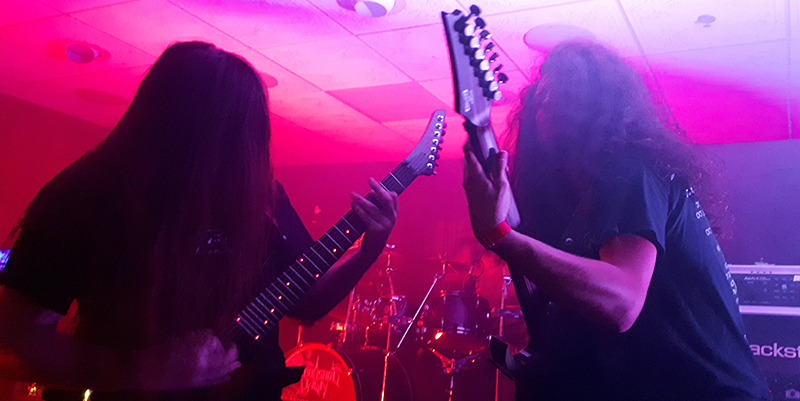 The masters of UK technical melodic death metal would prove a hard act to follow, but Cambridge, Ontario's own Æpoch were up to the challenge, having already showcased the talents of drummer Greg Carvalho and vocalist Brett MacIntosh. The night was Æpoch's party, and they brought their own bass-heavy blend of tech death to the stage, waking up an admittedly evening-weary crowd with a stellar performance. Of particular note was the performance of 'Delirium of Negation', by far my favorite track from their new album (those bass and guitar solos!) and 'Burn them at the Stakes', a dichotomous pair of tracks if there ever were any. Where Delirium brought the soaring tech, Burn brought the brutal, heavy-as-hell head-banging groove, showing that Æpoch is far from a one-trick-pony. 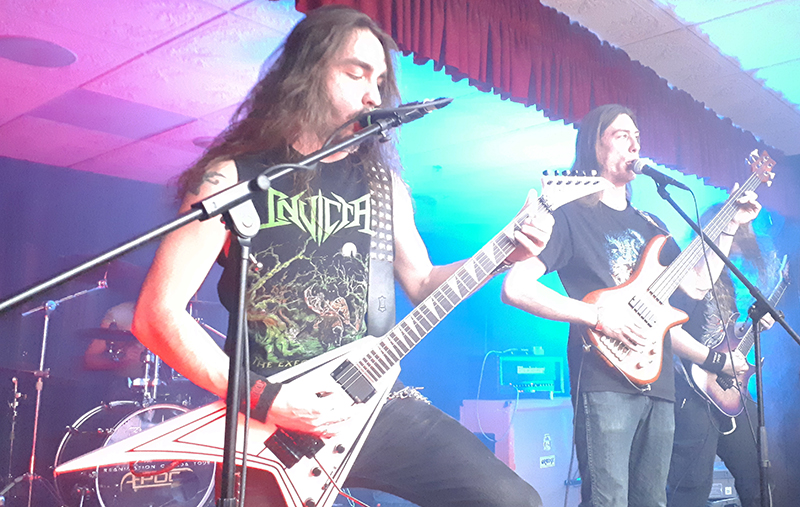 If there is one criticism I feel obligated to forward, I'd say that when Brett dials up the volume of his bass off and on throughout the set, it was often just too loud, overpowering everything else in a not entirely pleasant way. I think that dialing it back a bit would do a world of good to let the compositions breathe on their own. Bringing up the volume for certain parts a la Beyond Creation and Riftwalker is great, but too much can be overpowering and distracting. For what it's worth. 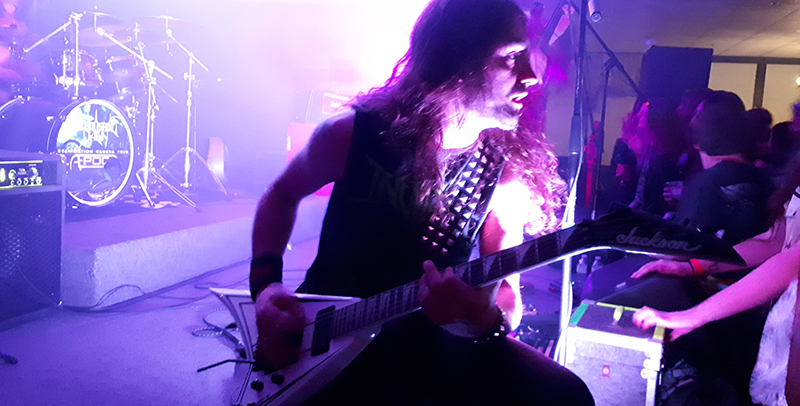 By the time I exited the venue I was thoroughly exhausted, neck and legs sore in a way that only attending a thoroughly entertaining live show can provide. I took with me a (somewhat gratuitous) amount of swag, including Bloodshot Dawn's limited Canadian tour shirt, featuring a mountie, a Tim Hortons coffee shop, the CN Tower, and a moose. Those Bloodshot Dawn and Æpoch albums will be keeping my commute to the local salt mines brutal as fuck for weeks to come! It's just too bad that Becomes Astral forgot to bring their CDs from Guelph; I would have loved to buy one of those as well after such an awesome set.


I can't help thinking back to the older gentleman crowd-surfing through the pit, not just once, but three times. He wasn't afraid to get right up in front of the action, grooving and nodding along with fresh faces and old battle-jacketed vets alike. Metal has a way of transcending boundaries—it lifts us all up to someplace special. And that's what keeps us coming back, year after year, to darkened venues filled to the brim with sweating bodies, freely-flowing alcohol, flashing lights, and that blissful wall of sound, all driven into a swirling frenzy by the pounding of a bass drum. Last night the Canadian metal scene showed that new blood can handily challenge the old, maybe even surpassing it given time, and Bloodshot Dawn showed us that the UK scene has what it takes to run with the best of their young Canadian counterparts.